The three pillars on which an analysis of society ought to rest are studies of economic, socio-demographic and environmental phenomena. Richard Stone, 1984.

Contrary to popular belief, hydroelectric power can seriously damage the climate. Proposed changes to the way countries' climate budgets are calculated aim to take greenhouse gas emissions from hydropower reservoirs into account, but some experts worry that they will not go far enough.
The green image of hydro power as a benign alternative to fossil fuels is false, says Éric Duchemin, a consultant for the Intergovernmental Panel on Climate Change (IPCC). "Everyone thinks hydro is very clean, but this is not the case," he says.
Hydroelectric dams produce significant amounts of carbon dioxide and methane, and in some cases produce more of these greenhouse gases than power plants running on fossil fuels. Carbon emissions vary from dam to dam, says Philip Fearnside from Brazil's National Institute for Research in the Amazon in Manaus. "But we do know that there are enough emissions to worry about."
In a study to be published in Mitigation and Adaptation Strategies for Global Change, Fearnside estimates that in 1990 the greenhouse effect of emissions from the Curuá-Una dam in Pará, Brazil, was more than three-and-a-half times what would have been produced by generating the same amount of electricity from oil.
This is because large amounts of carbon tied up in trees and other plants are released when the reservoir is initially flooded and the plants rot. Then after this first pulse of decay, plant matter settling on the reservoir's bottom decomposes without oxygen, resulting in a build-up of dissolved methane. This is released into the atmosphere when water passes through the dam's turbines.

Seasonal changes in water depth mean there is a continuous supply of decaying material. In the dry season plants colonise the banks of the reservoir only to be engulfed when the water level rises. For shallow-shelving reservoirs these "drawdown" regions can account for several thousand square kilometres.
In effect man-made reservoirs convert carbon dioxide in the atmosphere into methane. This is significant because methane's effect on global warming is 21 times stronger than carbon dioxide's.
Claiming that hydro projects are net producers of greenhouse gases is not new (New Scientist print edition, 3 June 2000) but the issue now appears to be climbing up the political agenda. In the next round of IPCC discussions in 2006, the proposed National Greenhouse Gas Inventory Programme, which calculates each country's carbon budget, will include emissions from artificially flooded regions.
But these guidelines will only take account of the first 10 years of a dam's operation and only include surface emissions. Methane production will go unchecked because climate scientists cannot agree on how significant this is; it will also vary between dams. But if Fearnside gets his way these full emissions would be included.
With the proposed IPCC guidelines, tropical countries that rely heavily on hydroelectricity, such as Brazil, could see their national greenhouse emissions inventories increased by as much as 7% (see map). Colder countries are less affected, he says, because cold conditions will be less favourable for producing greenhouse gases.
Despite a decade of research documenting the carbon emissions from man-made reservoirs, hydroelectric power still has an undeserved reputation for mitigating global warming. "I think it is important these emissions are counted," says Fearnside.
Cuadro 1 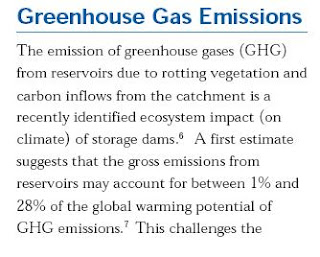 Brazil approves massive Amazon dam for construction(Reuters) - Brazil's environment agency gave its definitive approval on Wednesday for construction of the Belo Monte hydroelectric dam, a controversial $17 billion project in the Amazon that has drawn criticism from native Indians and conservationists.
The regulator, Ibama, issued licenses to the consortium in charge of Belo Monte to build the massive dam on the Xingu River, a tributary to the Amazon.
The government has said the 11,200-megawatt project, due to start producing electricity in 2015, is crucial to provide power to Brazil's fast-growing economy. It will be the world's third biggest hydroelectric dam after China's Three Gorges and Itaipu on the border of Brazil and Paraguay.
In January, Ibama had issued a preliminary license allowing the construction site to be set up.
Since then the project has been halted and resumed several times due to court injunctions obtained by environmentalists and native Indians opposing the dam.
Norte Energia, the consortium that won the auction to build and operate Belo Monte, is made up of state-run utility holding company Eletrobras, Brazil's second-largest pension fund Petros and local construction companies.
Originally conceived 30 years ago, progress on Belo Monte has been slowed over the years by protests, including an incident in 2009 in which Kayapo Indians armed with clubs and machetes attacked a state electricity official.
Critics from singer Sting to Hollywood director James Cameron and environmental group Greenpeace have said the dam will damage the environment and harm thousands of people living in the region.
The 6-km-long (3.75-mile) dam will displace 30,000 river dwellers, partially dry up a 100-km (62-mile) stretch of the Xingu river, and flood large areas of forest and grass land.
(Reporting by Leonardo Goy, Raymond Colitt; Editing by Reese Ewing and Eric Beech)

I got my PhD at the Department of Agricultural and Resource Economics at UC Davis. I entered the department to do development economics but ended up specializing in environmental and natural resource economics (ERE).*

But that didn't mean that I ignored agricultural economics. In fact, I learned quite a bit about farmers (most of it good), agricultural policies, and land and water management.

OTOH, I also learned about the "consultant-research machine" that one can find in most academic settings. In short, academics with credibility are paid to write reports for people in industry. Usually these reports are objective and based on the researcher's beliefs, but sometimes money can push the border between objective and "whatever you want us to say." It's hard to know.

In one case, we (ERE grad students) were depressed to see several of our professors and fellow students working on the cost-benefit of pesticide use, publishing "findings" for academic, industry and regulatory audiences that supported of the use of methyl bromide (MBr) for strawberries [PDF].** It seems that they assisted in winning an exemption from international protocols to ban methyl bromide (a carcinogen and ozone-depleting chemical).

MBr was eventually phased out, but now I see that its replacement -- methyl iodide -- is considered dangerousfor farm workers, the environment (and perhaps consumers).

And guess who is writing in support of methyl iodide [PDF]? The same folks. This is a sad pattern.

Bottom Line: Academics should remember that costs on one group for benefits to another group involves politics, not just economics. And they need to be careful about taking money from winners to cast doubt on costs to losers.
* In one memorable rebellion, I presented evidence to the chair (an aggie) that 2/3rds of the professors were aggies, but 2/3rds of the graduate students were ERE-oriented. That fact was not well received.

** These folks also claimed to be environmental economists. We agreed that their work related to environmental issues; we were not sure that it supported a healthy environment.

Posted by Carlos at miércoles, junio 01, 2011 No hay comentarios: