The New Stars of the Blogosphere

Americans trying to understand the nail-biting financial trauma of the past several months are flocking by the millions to a surprisingly lively source of enlightenment: blogs written by economists.

Such blogs are thriving in this recession, driven by intense interest from policymakers, investors, academics and people like Zina Poletz, a Minneapolis public-relations executive who says she had little interest in economics before the financial crisis intensified last fall. “I never thought I’d be sitting up late at night reading what [Federal Reserve chairman] Ben Bernanke thinks, but now I do,” she says.

For many people, economics has never seemed so captivating, or so relevant. The enormous appetite for information and guidance right now is hardly a surprise: Even those with a basic knowledge of supply and demand have struggled to keep tabs on the global downturn.

“My [economics] professors were always saying, ‘This is the most relevant class you could ever be in,’” says Christa Avampato, a product developer in New York City with an M.B.A. from the University of Virginia’s Darden School of Business. “But I think until the last 18 months I never really believed them.”

The result is a watershed moment for economics bloggers, ranging from academics to armchair economists, who are all too happy to help readers fill in the blanks—or find a place to vent their frustrations. Traffic to the top sites, such as Marginal Revolution, Freakonomics and the blogs from academics such as Paul Krugman, Greg Mankiw and Brad DeLong, surged anywhere from 80% to 250% from July to September 2008 as the financial crisis intensified, according to Compete.com, a Web site that measures Internet traffic. The most popular blogs can attract as many as 50,000 to 100,000 page views a day.

[pufff!!! en más de un año de vida de esta bitácora han habido alrededor de 3500 page views...estos chavos logran juntar 100,000 al día!!!]
“The ‘Financial Crisis for Beginners’ page is the most successful feature of our blog,” says Simon Johnson, a professor at the Massachusetts Institute of Technology’s Sloan School of Management. Mr. Johnson started his blog, Baseline Scenario, in September along with his brother-in-law James Kwak to build on the popularity of his blogging stint as chief economist of the International Monetary Fund, and to help people make sense of the unfolding crisis.
“I think there’s a big market for explaining to people what the heck is going on in a global context,” says Mr. Johnson. “Blogging can now be part of this portfolio you can do as an academic.”

Selling Books
Blogging, in return, helps academics raise their profile and connects them to a wider audience. “I make no money from my blog, but I do make money selling books,” says Mr. Mankiw, a Harvard University economics professor who served as chairman of President Bush’s Council of Economic Advisers earlier this decade. Mr. Mankiw is also the author of several textbooks on economics. His eponymous blog has received some 10.9 million visits since he started it as an extension of his academic work in March 2006.
“My publisher loves it that I do the blog,” he says. Its growth and popularity is partly owed to Mr. Mankiw’s succinct style and ability to connect external events to economics—debating the merits of taxing people by height, for example, or exploring how bus drivers respond to hourly rather than per-passenger pay.
He is also known for being a conservative voice in the typically polarized blog universe, which came of age under the Bush administration and led to the popularity of liberal voices like Mr. Krugman, a Princeton University economics professor and newly minted Nobel laureate who writes and blogs for the New York Times, and Mr. DeLong, an economics professor at the University of California, Berkeley, known for his rants against Republican policies.
[no creo que Mankiw himself esté de acuerdo con esto. parece que la influencia de Krugman, no siempre precisa, ha llegado muy lejos...] 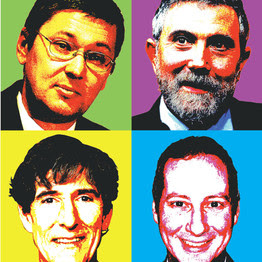 The financial crisis—and ensuing recession—has helped turn economics
bloggers like (clockwise from top left) Greg Mankiw, Paul Krugman, Alex Tabarrok
and Mark Thoma into Internet celebrities
The financial crisis has helped crystallize the ideological split between the liberal economists who favor government action and intervention in the economy and the conservatives who prefer a more hands-off approach. The result often pits Mr. Mankiw and other conservatives—such as Arnold Kling, an economist and scholar with the Cato Institute who writes for EconLog, or Megan McArdle, a self-described libertarian who blogs for the Atlantic—against Mr. Krugman or Mr. DeLong in fast-paced, high-profile arguments over health care, budget deficits and stimulus packages.

The economics blogosphere “can be a rancorous place,” says Jared Walczak, a 22-year-old legislative director for a Virginia state senator and a fan of the blogs. Mr. Walczak says he prefers the blogs that instead point toward interesting research and ideas, such as Marginal Revolution, which was started by two George Mason University economics professors and examines a wide range of topics from poetry to autism to ordering at ethnic restaurants. “It’s very eclectic and always a source of something new,” he says.

Marginal Revolution is one of the best-read economics blogs, attracting more than 23 million visitors since its launch in 2003. Its success has boosted the careers of its co-founders, Tyler Cowen—the general director of GMU’s Mercatus Center, which is known as a bastion of libertarian thought—and Alex Tabarrok, a research fellow there.

‘It’s Changed My Life’
“It’s really changed my life,” says Mr. Cowen of the blog, saying he gets several requests for speaking or writing engagements every day and has been recognized “eight or nine times in public—and I don’t even go out that much!” He is the author of several books, including “Discover Your Inner Economist.” His latest book, “Create Your Own Economy,” was released July 9. He and Mr. Tabarrok also have a textbook for introductory economics due out in the fall—the collaboration that years ago sparked their blog in the first place.
While economics blogs have helped fill the public’s craving for guidance to the recession, some of them also became popular for helping alert readers—from the layman to the sophisticated investor—to the looming financial crisis before it hit. One in particular, Calculated Risk—run by Bill McBride, a retired executive in Orange County, Calif.—is often cited as being particularly prescient in warning about the housing bubble and bust, while the Big Picture, a blog run by investor and author Barry Ritholtz, also stands out from the pack. Paul Kasriel,an economist with Northern Trust bank in Chicago, says reading blogs like Calculated Risk helped him realize how bad the housing market was back in 2006-07, when many of his peers were still optimistic.
Some of the most popular economics blogs are those run by major media organizations, including The Wall Street Journal’s Real Time Economics, the New York Times’ Economix and Freakonomics, and the Economist’s Free Exchange, all of which offer a broad swath of news, analysis and daily links of interest. There’s also Economist’s View, a Web site started by University of Oregon economist Mark Thoma in 2005, with detailed analysis of the economy and the Fed, and a comprehensive daily roundup of links for the insatiable reader.
Fans of the blogs say reading them has not only helped them understand the economy, but has also helped them make improvements to their everyday life. Even those who majored in the subject in college, such as Nate Chenenko, 23, who works in Washington, D.C., as a government business analyst, say they have a new appreciation for the subject.
Mr. Chenenko, for example, recently decided to hire a moving company rather than take the weekend off from his part-time job operating a “pedi-cab”—a bicycle taxi—around the streets of the capital. “I realized the opportunity cost of taking the day off would be greater than paying movers,” he says, “and I’m not sure I would have thought of that if wasn’t consuming economics on a day-to-day basis.”
—Justin Lahart contributed to this report.
[bueno. allí está. en la cuestión doméstica hay algunos blogs "populares" como el de Macario Schettino en El Universal o el de Gerardo Esquivel. Con todo, por desgracia, me parece que el gremio nacional va muy a la zaga respecto no digamos ya el gremio anglosajón, sino respecto a la blogósfera mexicana en general...]
Posted by Carlos at jueves, julio 16, 2009 No hay comentarios: